Well rested, we were ready to start our day and explore Bilbao. The city has gone through a major renaissance in the last thirty years. Bilbao was an industrial city with steel and iron factories framing the skyline as tons of coal moved up the river feeding the plants. By the 1970s, the city, whose history goes back 800 years, was in disarray and dirty. Sometimes a bad thing will occur, and a good thing will blossom. The steel industry failed in the mid-seventies and a devasting flood in 1983 brought the city to its knees. The revitalization began in the 90s as Bilbao transitioned from an industrial based city to a service-oriented business center. Today the city has been transformed and is beautiful. 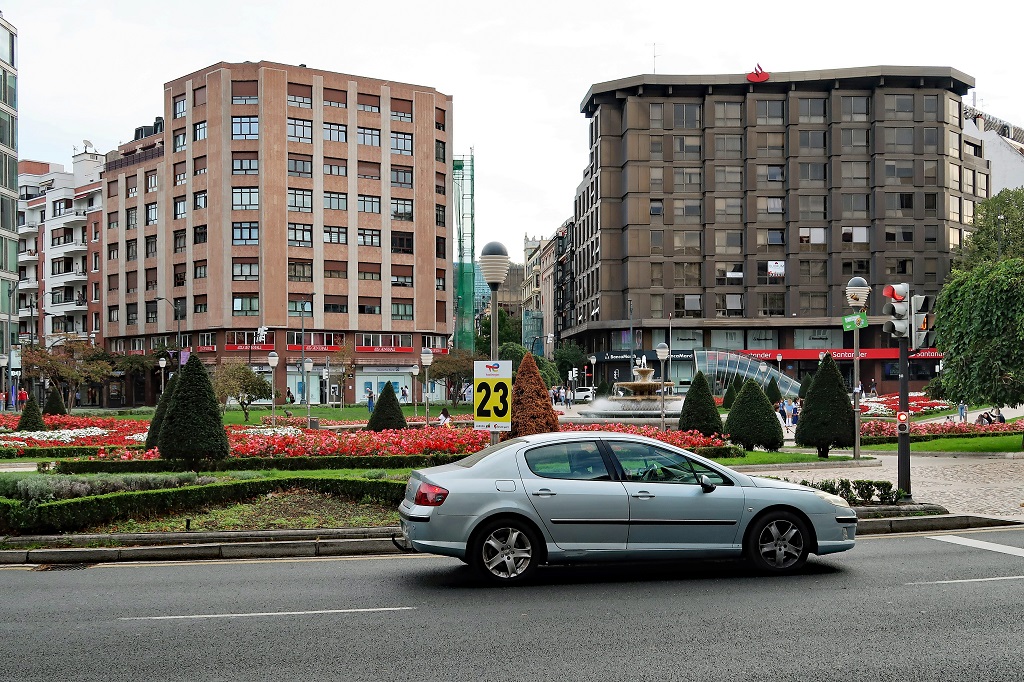 The centerpiece of the renewal of Bilbao is the architectural wonder by Frank Gehry which stands along the river. The Guggenheim Museum houses one of the largest collections of modern art in the world. We got our first glimpse of the museum from a couple blocks away and we were immediately awe-struck by its design. 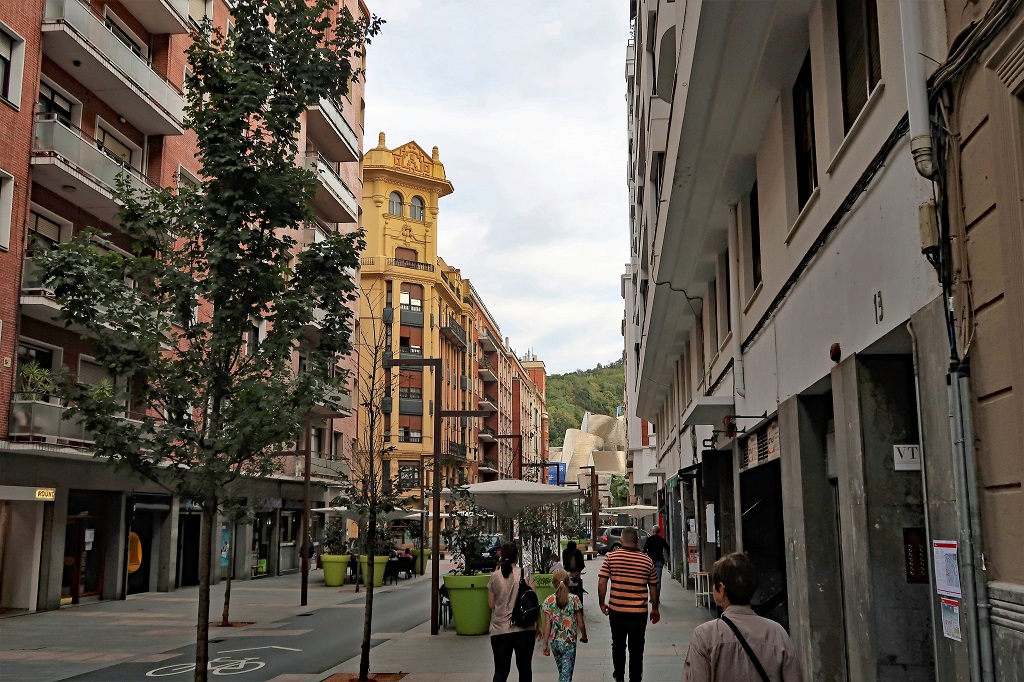 We had heard so much before coming to Bilbao about the live dog bush sculpture, but to see it up close made it believable. Only partially in bloom in pansies, we could not imagine what this huge shrub would look like adorned in an abundance of colors. 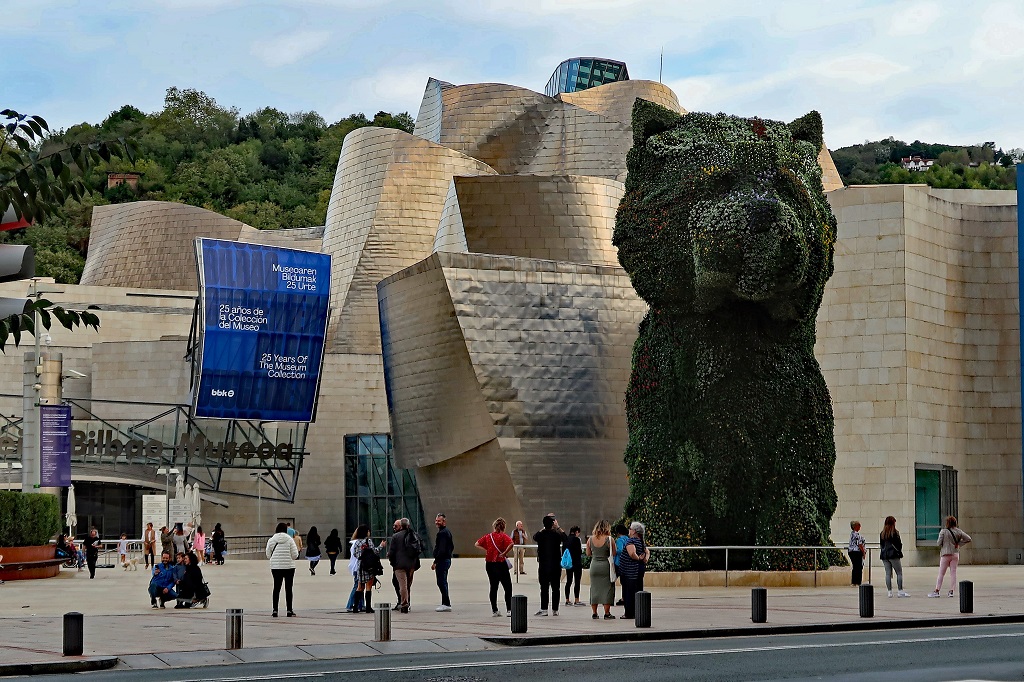 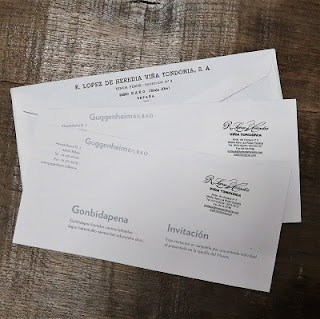 When we completed our tour of Viña Tondonia back in Rioja, we had told Luis, our guide, that we were headed to Bilbao. He asked, “are you going to the Guggenheim”? “Absolutely” we responded. He left us and returned a few moments later with an envelope with two free passes to the museum. Viña Tondonia is a patron of the museum and we were going to be beneficiaries of their generosity to the arts. At least, that is what we thought as we approached the ticket counter. A nice young girl welcomed us to the museum with a smile and said we would not need to use our passes today. It was the anniversary of the museum and entry was free for all today. We put the passes back in our bags and headed into a large atrium to begin exploration of this amazing building and its contents.
Neither of us are what one would call art experts, but we really enjoy art museums. Modern art is not necessarily our favorite either. Dali’s surrealism or Picasso’s cubism works are things we really do like, but that is probably as deep into what some may classify as “modern works” we enjoy. In hopes of gaining an appreciation for more modern sculptures and paintings, we visited the first gallery. A large room, probably the size of a football field, contained large arcs, spirals, and bent shapes created by Richard Serra. These shapes covered the entire gallery. 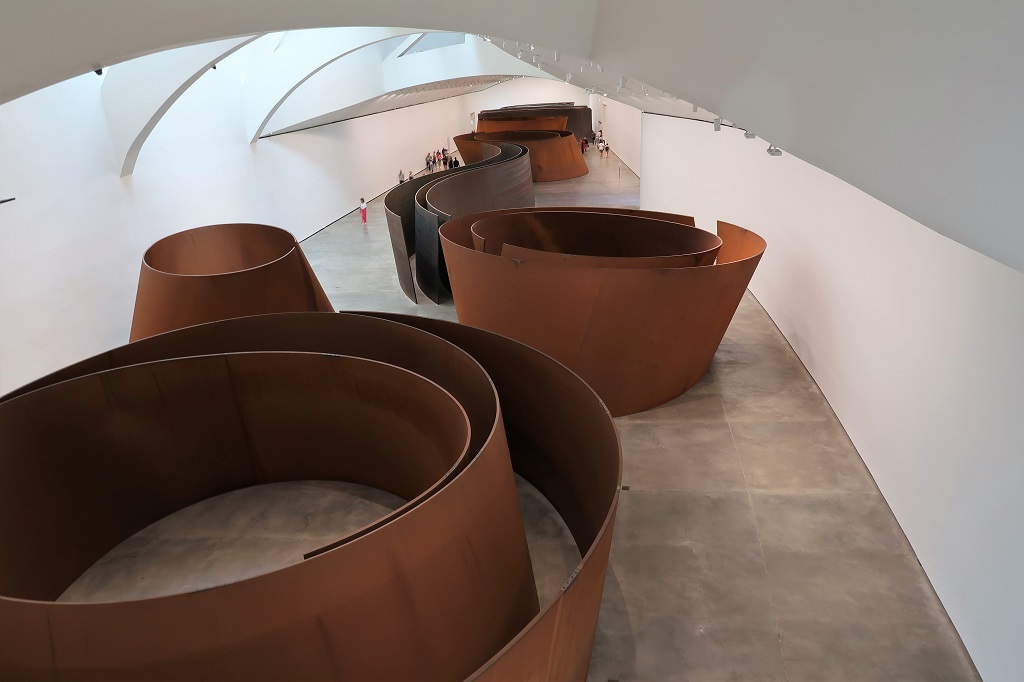 The size and twisted shapes of steel are a marvel and truly distorts ones sense of space, but the large room void of anything but twisted pieces of metal did not overwhelm us. 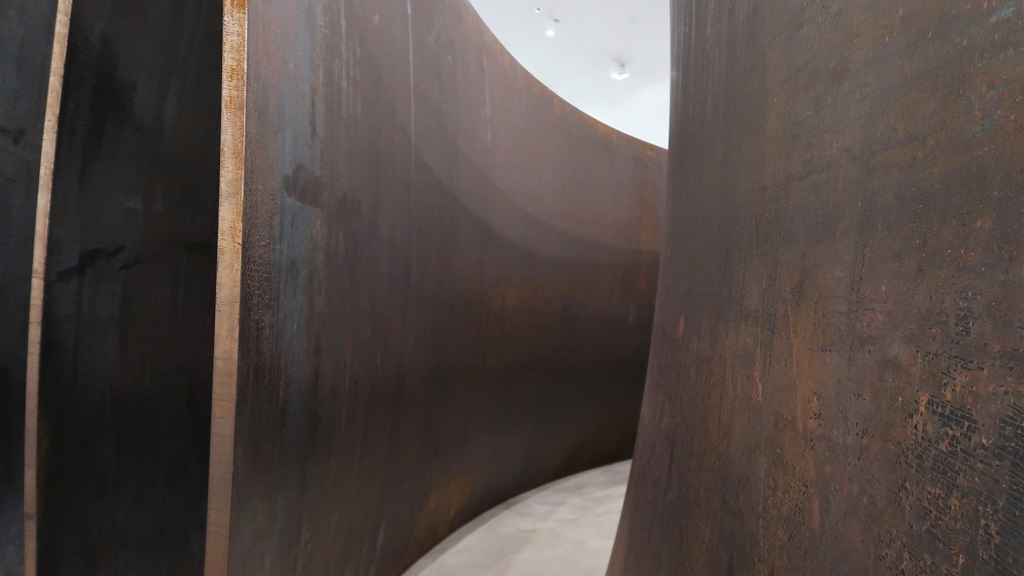 Wandering from gallery to gallery, we saw some very interesting works, but we were not sure we were gaining an appreciation of modern art. However, we can honestly say the descriptions of the pieces were out there! Having read thousands of wine descriptions, the use of words to define what you are tasting or in this case looking at are used liberally. Politely speaking, we just did not get it!

This work done by Yoko Ono was done in the museum during something they call “Action Performances”. It tells the story she remembered as a child about a Samurai and what he was willing to suffer to spare townspeople from misery. In the nine different canvasses she relates the Samurai story to her own life. Maybe we did not appreciate the piece because we do not understand Japanese. 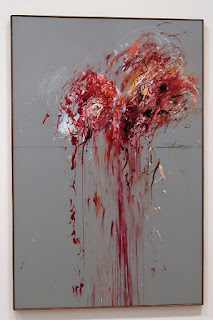 We did enjoy some of the works we encountered at the Guggenheim. This picture is one of a group of panels that we did like. The choice of colors and texture was really cool, but honestly, the artist’s creativity was evident to us, but we could not discern their talent. Oh well, it does hang in a prestigious museum so somebody must have validated the work as art. Some may say that the painting belongs on a refrigerator in a kitchen vice an art gallery, but that assessment would be a little unfair without a knowledge of modern art. We made a conscious decision not to be critical, but just to appreciate what we saw.
There were galleries that we really liked, most of which are what we would call pop art. The colors filled the space and the whimsical nature of the works brought smiles to our faces. 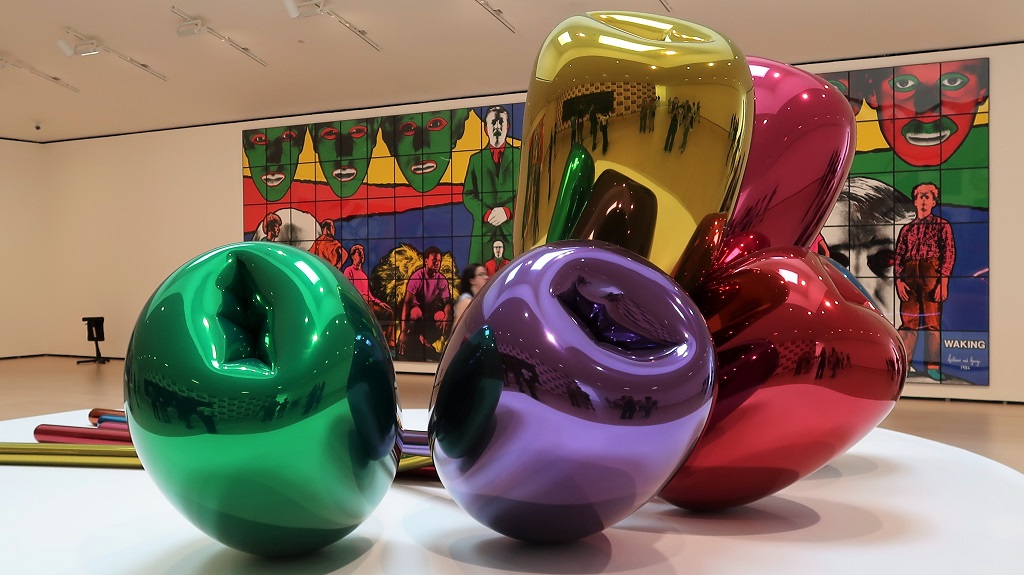 After spending almost three hours in the Guggenheim our visit came to an end. We stopped in front of a picture and just stared at this work of art? We decided it captured everything we knew and understood about modern art. We are not criticizing the artist, the sculptors, or their work… we just do not understand it! 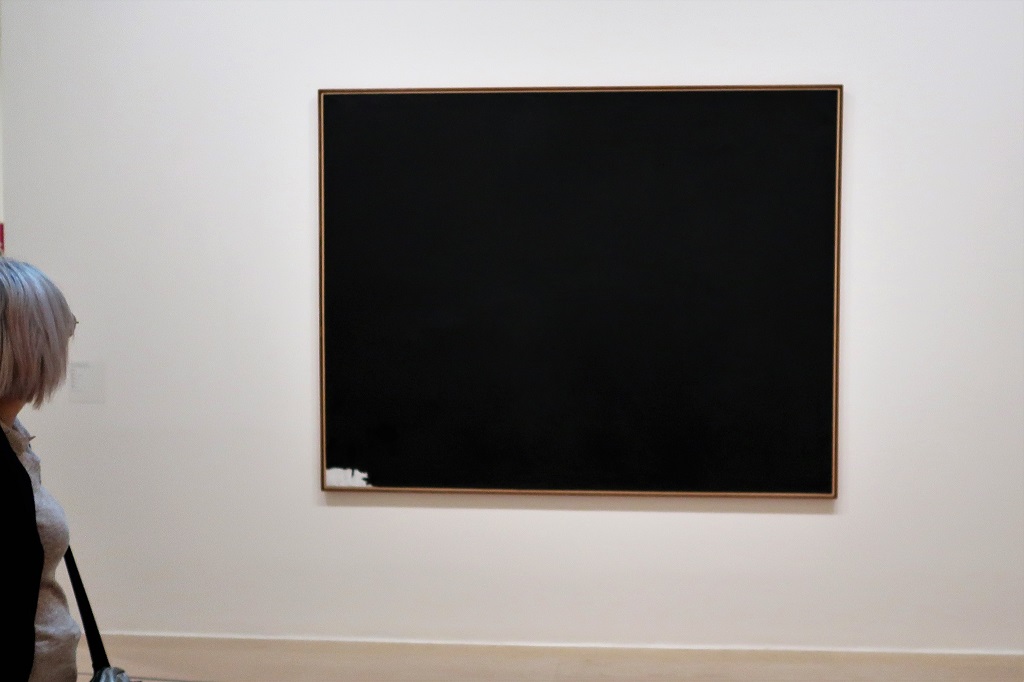 We exited the museum and began walking the grounds of the Frank Gehry creation while admiring the building. Granted, the building is as abstract as the art inside, but for some reason its architecture captivated us. 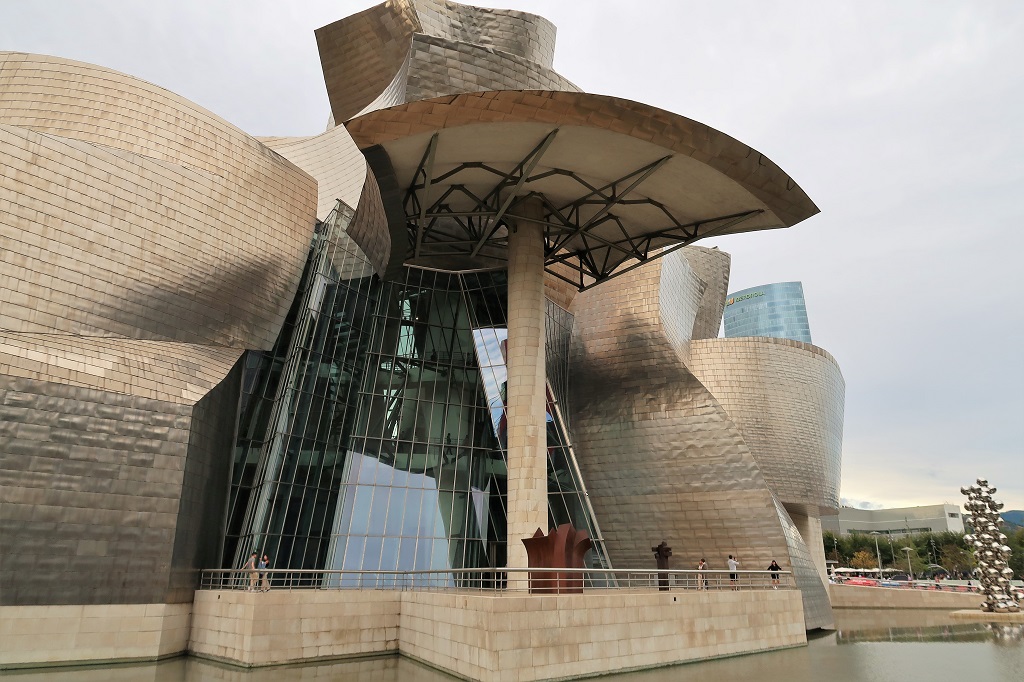 The back side of the museum is on the water and has a broad walkway that heads to the old town. Tom decided we would return to try to capture in pictures the beauty of the building in the bright sunshine. 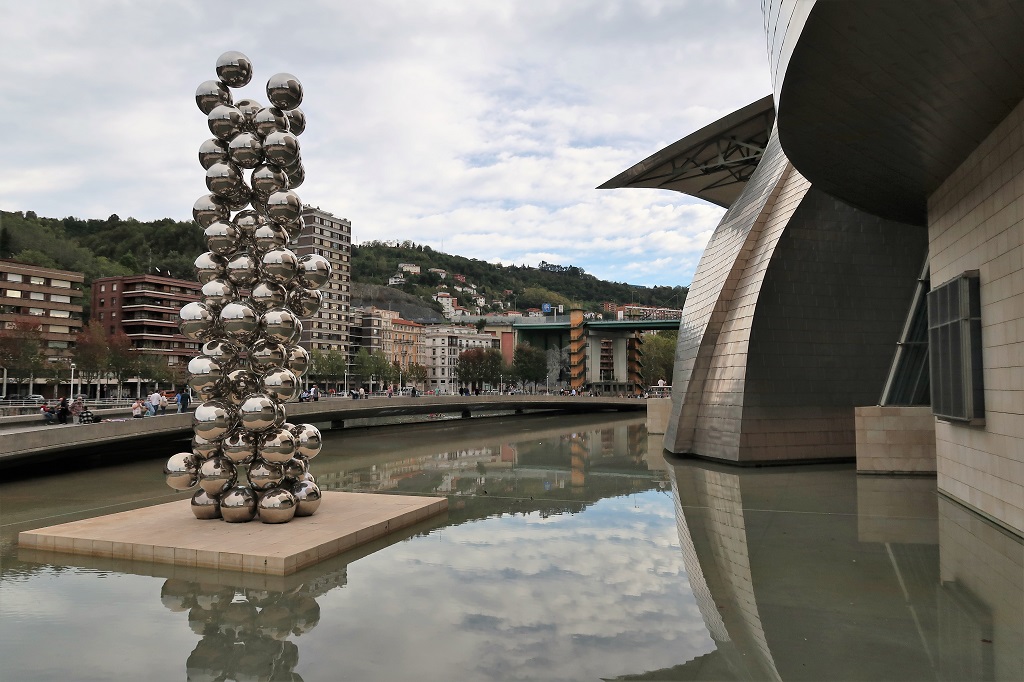 Slowly, we walked along the river with no real destination in mind. It appeared that there were many people doing the same think we were… just taking in the day. It was hard to believe at one time the river was polluted and filled with trash and the skyline was covered in smoke. 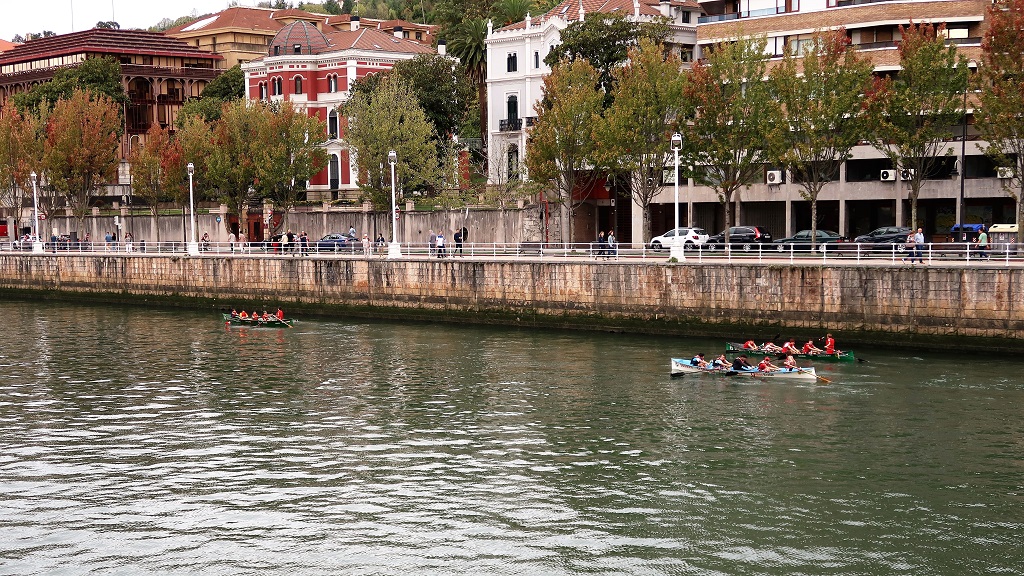 One of the most known landmarks in Bilbao is the Puente Zubizuri (White Bridge). It is a steel suspension bridge that curves across the Nerbioi River which separates the city. 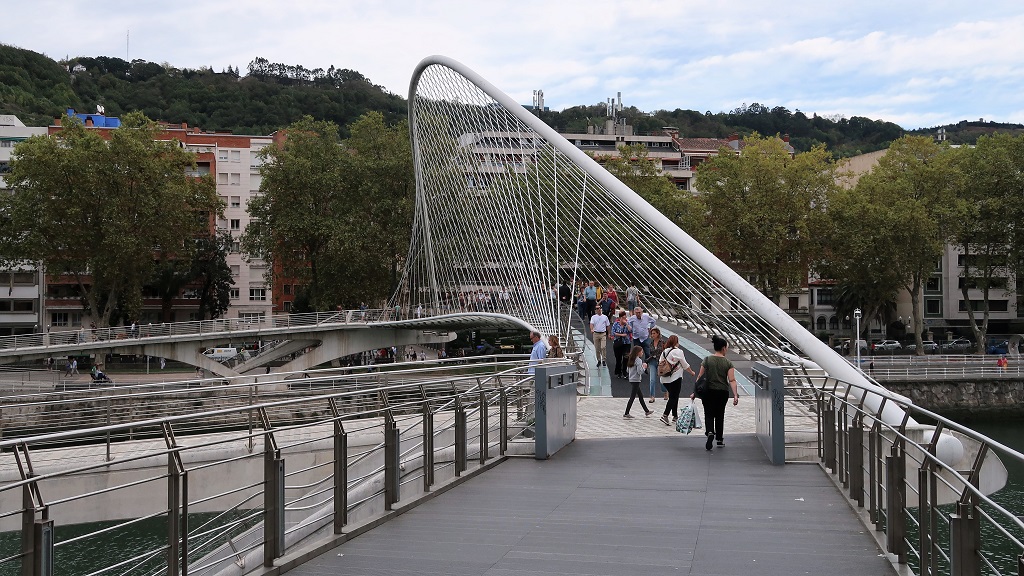 This footbridge has glass panels that frame a rubber cushioned walkway which is just fun to walk on. 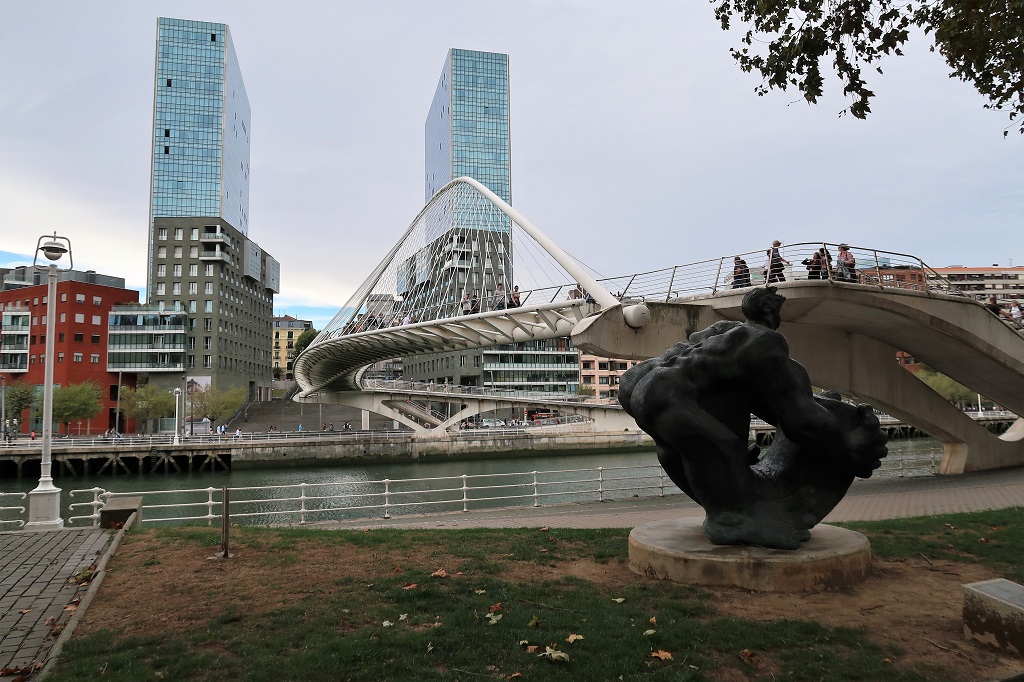 The one thing we did notice, not sure we had seen before, was skyscraper buildings with open windows. The breeze must rip through the apartments or offices when they are opened. Bilbao appears to be very conscious of the environment and the need for green space. There are a lot of small parks and squares throughout the city which are connected by public transportation. 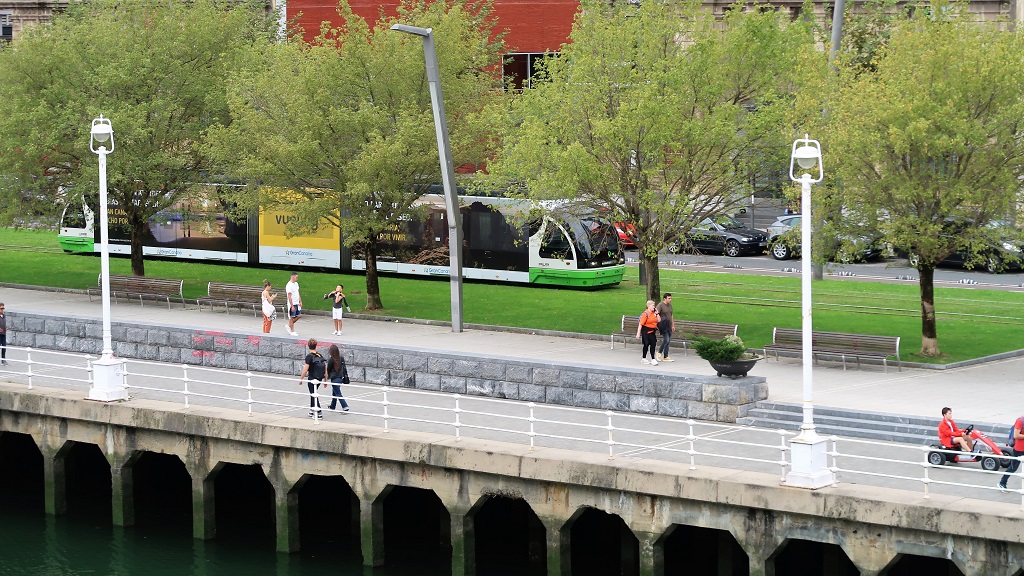 Crossing over the bridge, we continued to walk paralleling the river. We stopped at the market checking out the fresh fruits, vegetables, cheeses, and assorted crafts being offered by vendors. It was a lovely day to explore and experience the new sights and smells around us. 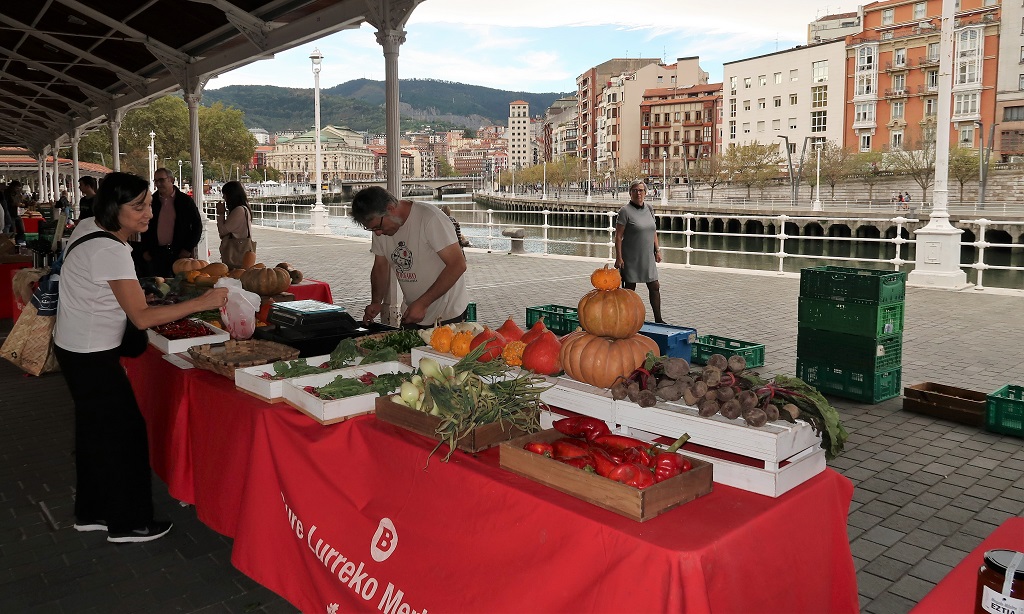 It was not much further in our walk when we discovered a treat that we could not pass by. The window was full of ice cream bars, and Tom will not… does not… pass by anything Pistatxoa or Pistacho or Pistachio. Janet went with the Dark Chocolate with Carmel and Sea Salt. To try to describe how good these treats were, the English language falls short because there are not enough words available to accomplish the task. Yum Yum! 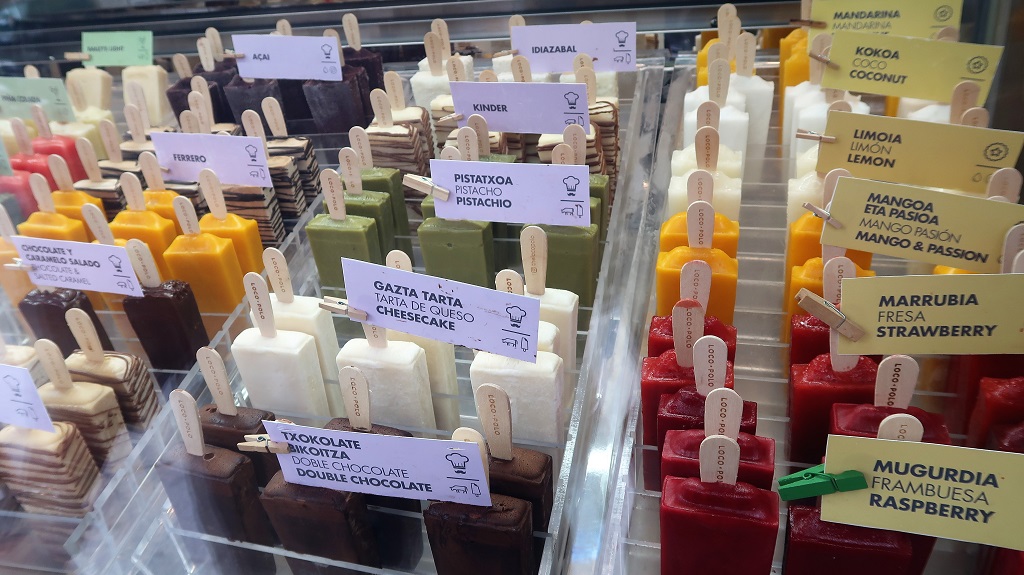 By chance, we ended up in the Plaza Nueva which is only a few blocks from the river. We had unknowingly discovered pintxos heaven. The large plaza was ringed with bars offering every type of pintxos one could imagine. The place was packed with people enjoying the nice weather with a glass of Txakoli, the local wine, and some sort of snack. We decided to join in, but no seats were available. Janet grabbed a place on the wall and Tom set off to grab some wine and pintxos.

Back at the apartment, we decided not to repeat our mistake from the night before and made reservations for dinner. We have found most places only do one seating a night and reservations are required for a spot. Making the reservations online, we discovered our restaurant of choice was back at the Plaza Nuvea, so we headed back to pintxos heaven. As busy as it was during the day, it was all of that and more at night. Children were playing soccer, riding bikes, and dancing while mostly dads looked on with a beer and a snack. 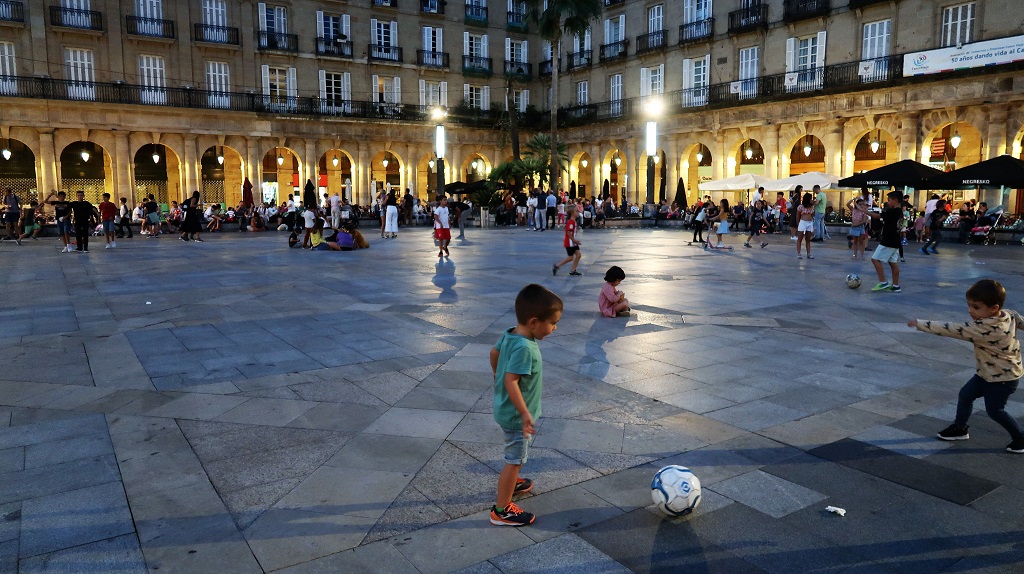 It was only 8 o’clock and we had an hour before our reservation, so it was time for a glass of wine and pintxos. You understand right? It had been a whole two hours since our last treat. 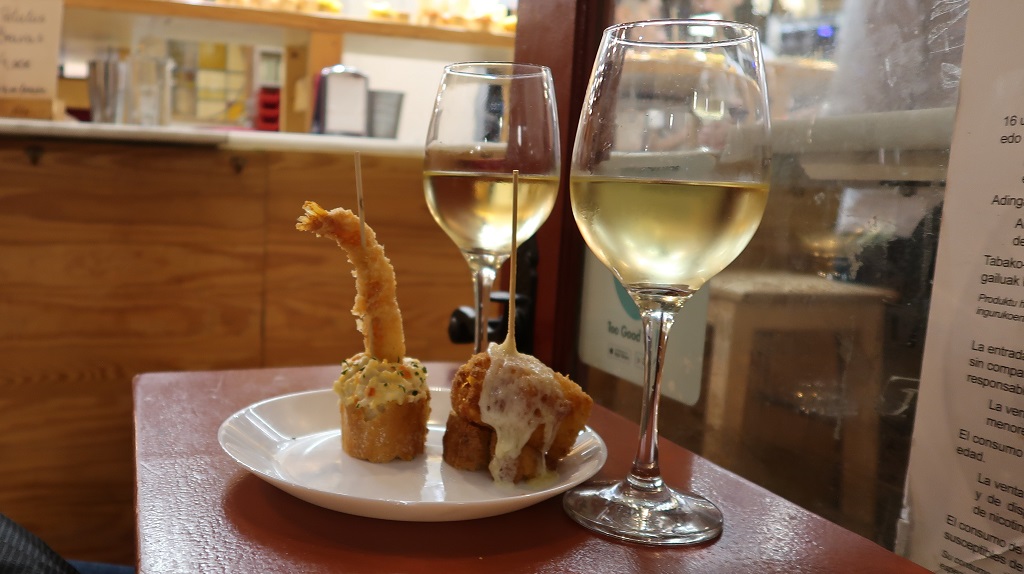 Watching the kids play and enjoying our pintxos, we could not help to understand why the Spanish lifestyle so agreed with us. Yes, it would be much nicer if dinner was at seven, but we were slowly adjusting to the late dinner hour. 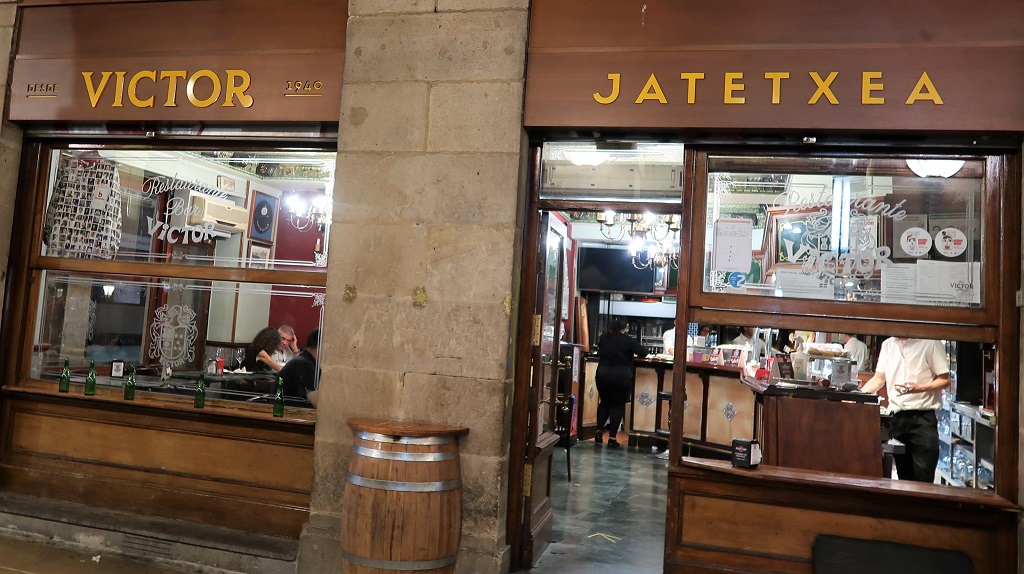 Arriving at nine o’clock sharp, they were not ready to seat us. The pintxos bar downstairs was clearing out and the restaurant which was upstairs was still empty. It did not take long before we were seated for a wonderful meal with some great wine and desserts that were memorable!
For starters, Tom went with the Iberico ham (He did not realize it would be a whole plate of it!) while Janet enjoyed what was listed as hot vegetable food. Of course, with a little ham on top for good measure. 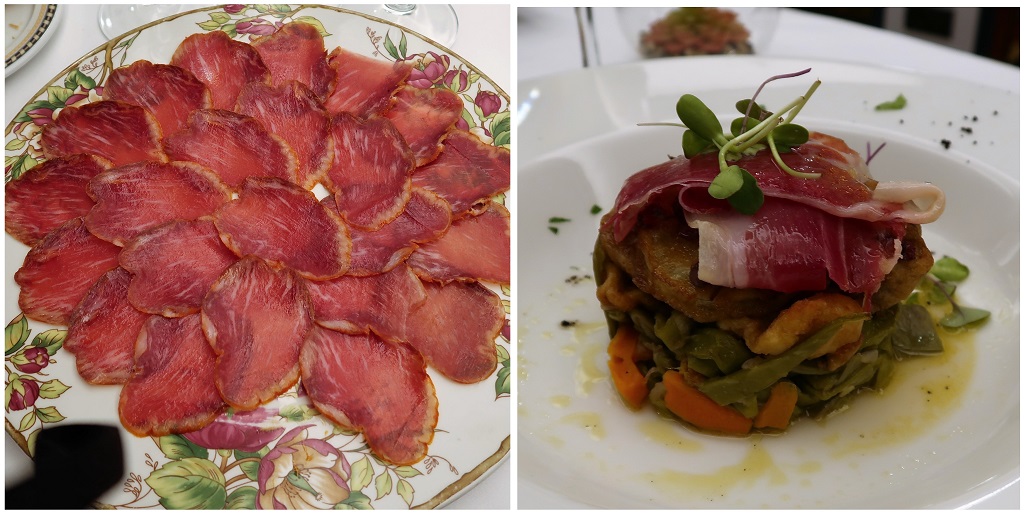 Since Janet was heading down a seafood trail and Tom looking to enjoy some part of a cow, the wine choices went Red and White. Two wonderful wines that paired very well with our dinner. It was also nice that the wine menu offered 500 ml bottles. 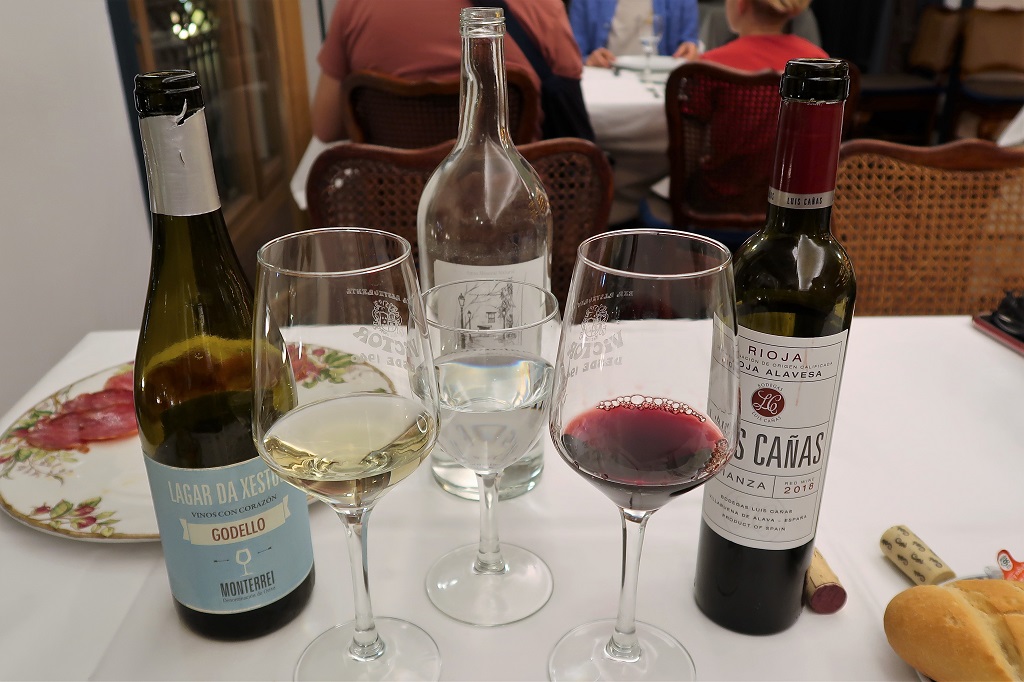 When the steak arrived, Tom was concerned that it was overcooked. Au contraire, it was rare, but no sound was heard when he cut into the meat. Janet’s eyes lit up when her shrimp were surrounded with micro-greens.

We were so full when we finished our meal, we decided we needed to order dessert just so we could be miserable 😉.  Tom went with the classic cheesecake with homemade ice cream with red currant swirl and Janet went with Victor’s take on Dulce de Leche Cheesecake with caramel.

A cup of coffee and a nice slow walk back to apartment was what we needed after a meal like that. We had clocked over 8 miles walking on our journeys today and with full bellies it was time to call it a day. Tomorrow is Sunday and we plan to have a very low-key day… well that is the plan.